3D modeling and rendering is a useful tool for designing glass. Unlike two-dimensional sketches, 3D modeled objects can be observed from every direction. Unlike 3D mock-ups with an opaque material such as clay or plaster, 3D rendered objects can have textures with glass-like characteristics such as transparency, translucency, reflection, and refraction. These features give the designer a better idea of what the real glass object will look like.
Once the main body of an object is drawn with the program, modifications can be made quickly, so refining designs becomes more flexible and efficient. The benefits are even greater when you design more complex works such as large-scale structures with multiple components.
Due to the accurate and realistic visualizations, 3D modeling and rendering also become a powerful tool for collaborative and commissioned work. It helps in showcasing and sharing one’s ideas with others.

Not long after I have learned 3D modeling with the program called Cinema 4D in 2007, I started to test the possibility of utilizing the modeling skill in the designing process. Arc study was the initial one. From 2005, I had 10mm diameter arc shaped tubes bent in a hotshop(top left.) I played with them to know what structures would be created with multiples, however, the process of making mock-ups was difficult and slow with this curvy shape. I found that 3D modeling with Cinema 4D made it easy to visualize many variations in a short time. 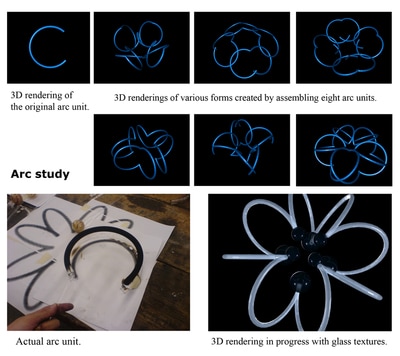 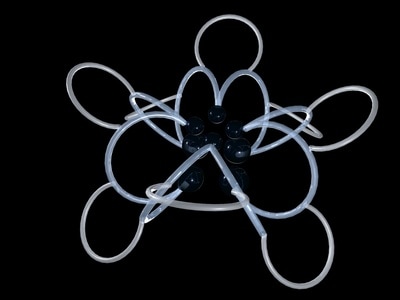 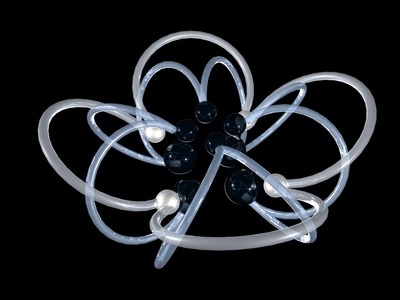 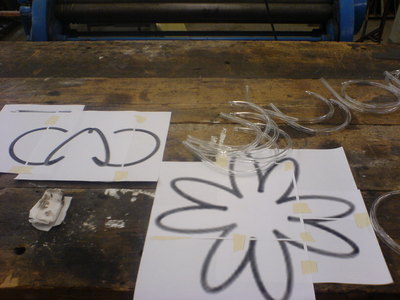 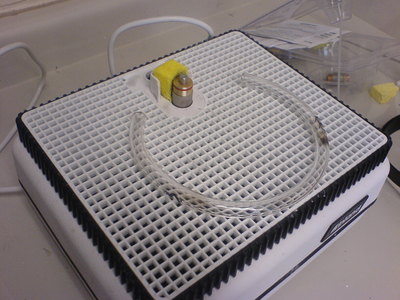 Bubble Teapot is one of my work designed with 3D rendering skill. My initial plan was to assemble a bundle of clear bubbles/ to make the shape of a tea pot. I wanted to use various size of bubbles, and the overall form would be fairly rounded all over. 3D rendering was quite handy for the project. After I drew 24 bubbles in the program, I adjusted the proportions and positions of each bubble while checking them from different angles.
Once the design was finalized, I printed the top and side views and used them as blueprints.  I wanted to minimize the chance of redoing or fixing since that would create a higher risk of cracking the whole piece. This planning process helped me visualize the object and prepare the steps, so the flameworking process became more predictable and successful. 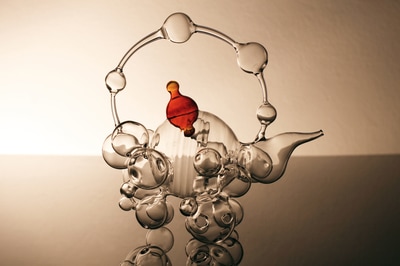 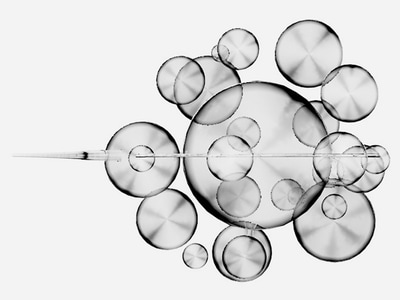 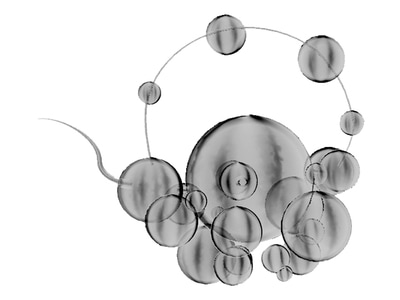 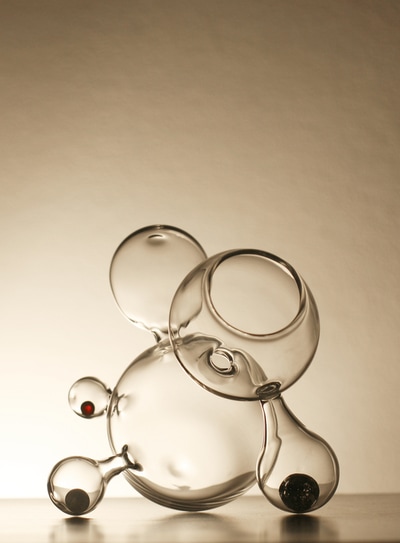 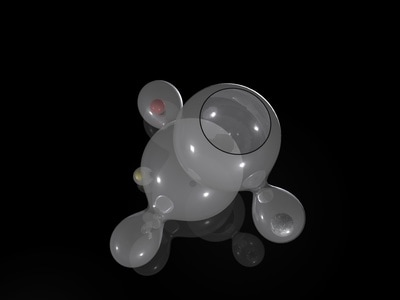 ​This is a 8 feet long glass boat I have been built. Before I started, I created a 3D model to plan how many bubbles and bars I would need. With the rendering, I was able to measure the amount of materials needed and length of time I should put to finish the project.
The project was granted by Ontario Arts Council. Special Thanks to the Glass Blowing Shop at the Western University. 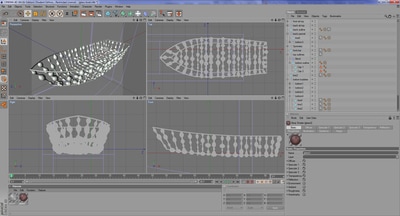 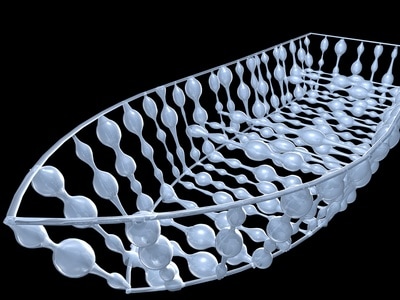 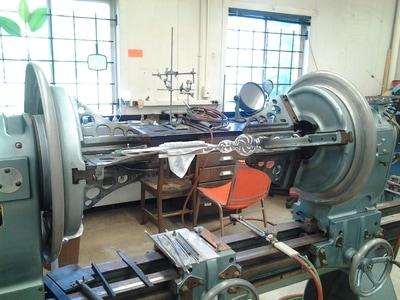 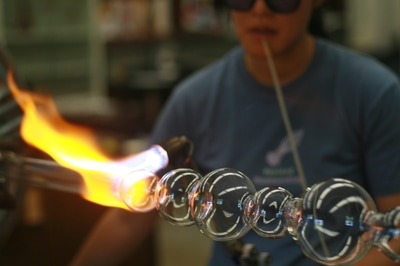 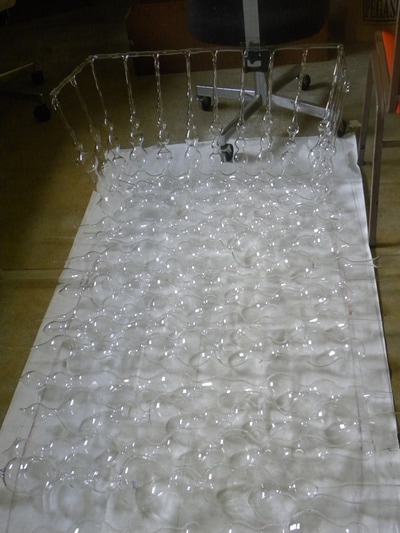 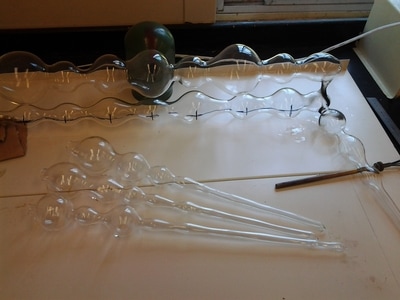 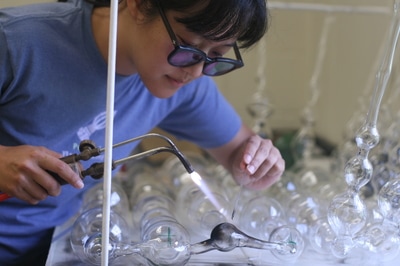 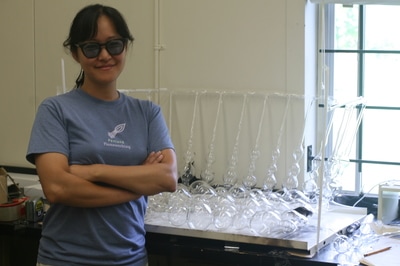 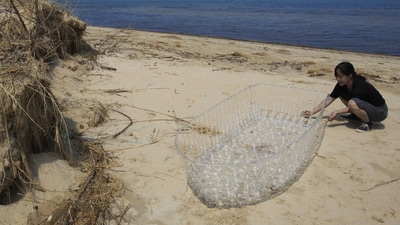 Fragile Creatures were designed to be hybrids, formed from nature and as an artifact. This half-organic and half-mechanical creature was made from broken glass apparatus. The series was inspired by the fear and the curiosity regarding bioengineering technology. Many of the flameworked parts were assembled to give the objects the illusion of possessing mechanical functions. Before I began the assembly, I finalized the object’s overall form and how each component would be interchanged or coupled by first playing with the components in Cinema 4D. 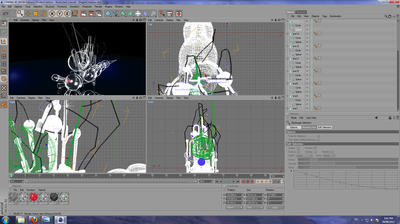 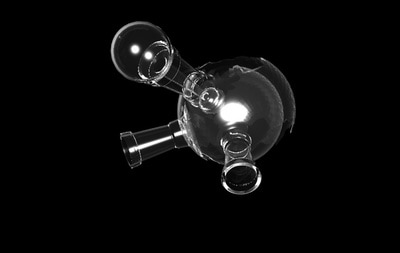 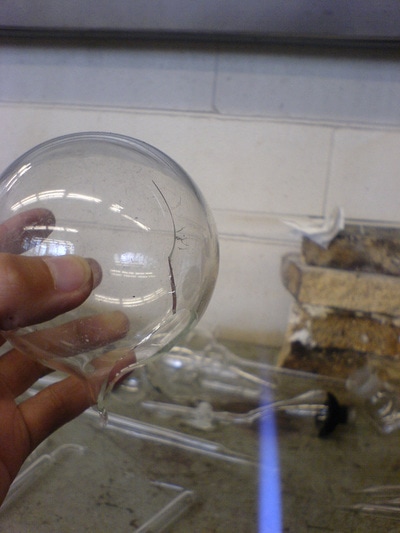 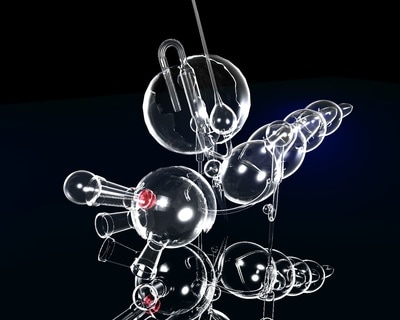 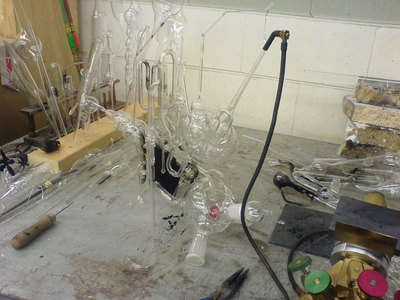 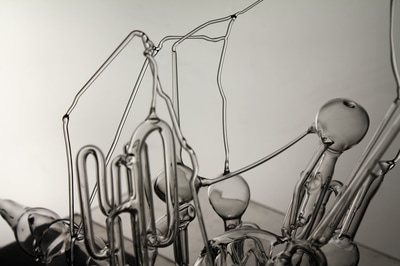 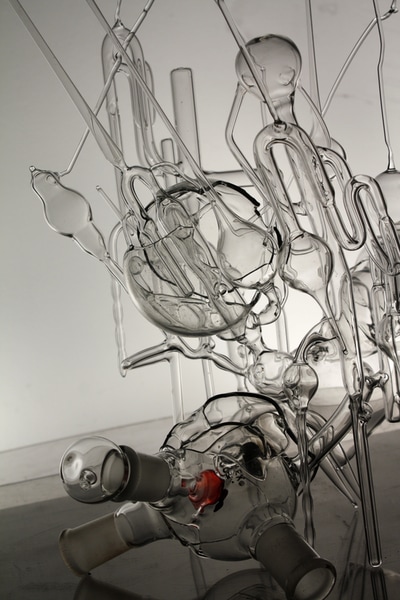 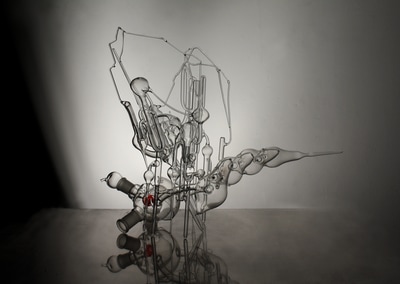 Currently I am working on a project, creating geometric patterns with variety of elements, named Mandala. For the project, I am using Cinema 4D to help navigate complicated patterns. To create the object, I first drew each element and arrayed multiples. Then I added more layers by repeating the elements in different sizes and positions. With the computer, I could easily adjust and organize the elements to create complex designs in short time. 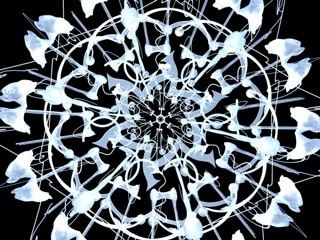 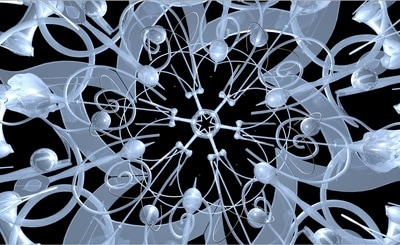 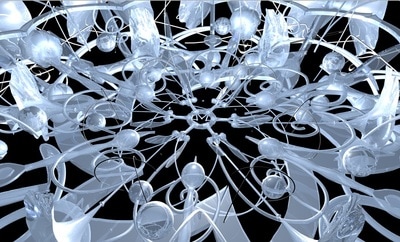 Thanks to the Glass Art Society, I received the Technology Advancing Glass (TAG) grant in 2015. My proposed project was to create a series of video tutorials about how to apply 3D computer modeling and rendering to glassmaking. The contents of the videos will be specially designed for glassmakers. Each clip will introduce a different way of drawing glass objects in a modeling software called Cinema 4D.

Let’s Draw Glass in 3D
Let’s Draw Glass in 3D is a series of video tutorials that introduce how to apply 3D computer modeling to glassmaking. The series is still in process and will be composed of 11 clips. Each clip will be about ten minutes long and will show different ways of drawing glass objects with Cinema 4D. The tutorials were recorded with Cinema 4D R15.
Contents
1. Why 3D rendering?    ( https://vimeo.com/101446228 )
2. How to draw solid forms (Primitives) ( https://vimeo.com/170290702 )
3. How to draw blown forms (Lathe NURBS)
4. Deforming (Bend, Twist, Tape)
5. Cold cut (Boole)
6. How to draw linear forms (Sweep NURBS)
7. Assembling (Array, Metaball, Symmetry)
8. How to make glass glassy (Textures)
9. How to make glass shine (Light and Camera)
10. How to make glass explode (Simple Animation)
11. Fun effects (Stained glass, Bas Relief)

People often say “every material speaks its own language.” I think every technique speaks in different ways and results in different outcomes. For me, adapting different techniques is always thrilling. 3D modeling has been helping me develop unique designs in flameworking. Through ongoing experiments, I believe I can create many exciting hybrids of 3D modeling and glass.
I hope that my video series initiates more interest in utilizing 3D modeling, and I hope it helps more glassmakers step into a world of new possibility.